a sweet journey through life…

Simplicity at it’s best…this Pear Tart with orange glaze will amaze your taste buds and warm your tummy! 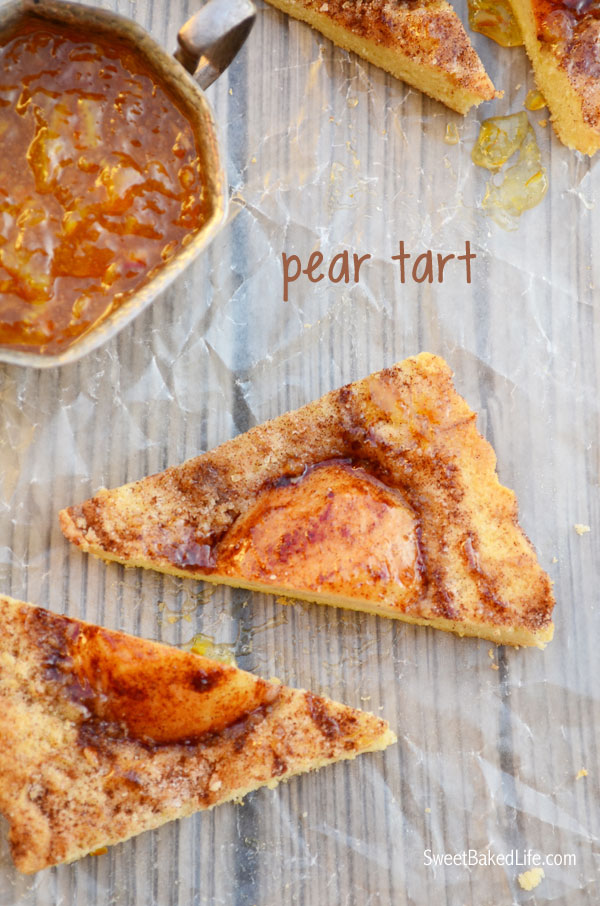 Ever since I got my rectangular tart pan, I have been thinking of new and interesting treats to bake with it.

However, I have really only made a few things in it, such as this Chocolate Malt Tart and this Chocolate Caramel Twix Tart (when I blogged this I did not have the tart pan yet, so I used a round tart pan, however I have baked this several times in my rectangular pan, but have not taken photos or done another post — may have to put that on my list!).

So, I thought it was time to get something new and memorable baked in my favorite pan and share with you! And since the fall is upon us and the weather is finally brisk with hints of rain in the air — something warming and wonderful was on my mind!

I wanted something that I had not really baked with before, I wanted to create a new adventure.

As I wandered through the fresh fruit section at my local grocer, big juicy pears jumped out at me! I knew that this would be the centerpiece to my tart. I had not baked with pears before so this would be the perfect introduction.

Along with the pears, I also snagged some fresh lemons and a jar of orange marmalade and was on my way to whip up my new treat!

This recipe is really easy to prepare mostly because you to not have to make a crust that you have to roll out. And if you know me, I do not like traditional crust; I know strange for a baker! Instead, mixing a few simple ingredients you then press the crust into your tart pan. How easy is that!

The result is a fluffy and moist base engulfed with juicy pears, sprinkled with cinnamon-sugar and glazed with tangy-sweet lemon scented orange marmalade. The flavor combination will amaze you — warmth from the cinnamon, sweetness from the pears, and tartness from the lemons.

You can serve it warm from the oven or room temperature. It’s great with a big cup of coffee in the morning, or with a cup of tea as an afternoon treat. You could probably even serve it for dessert, it’s that good!

Any way you slice it, you’ll want another piece of this mouth-watering Pear Tart! 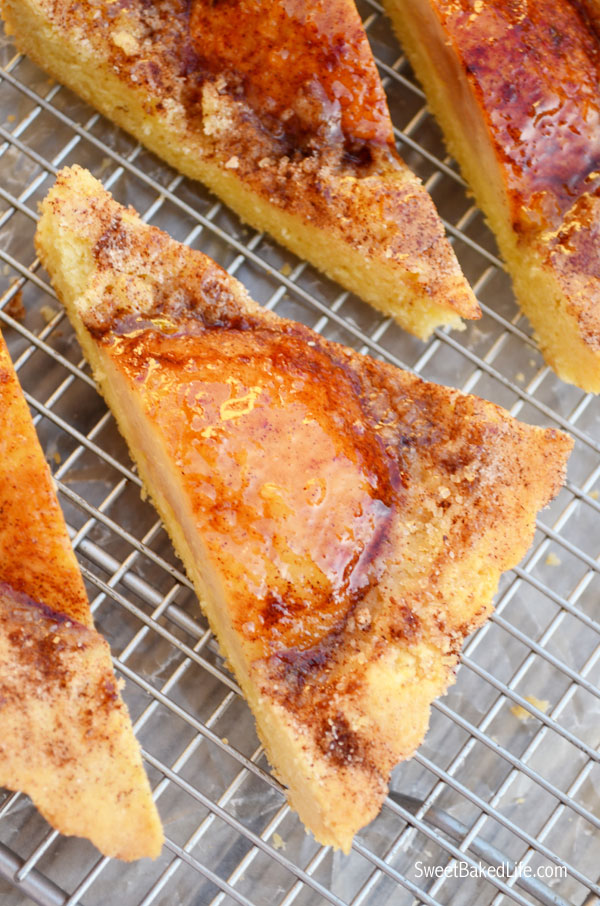 Heat your oven to 350 degrees. Spray a 4-inch rectangular tart pan with cooking spray and set aside.

Into a medium bowl, add the flour and baking powder, stir then set aside.

In a large bowl of an electric stand mixer with the paddle attachment, cream the butter and sugar on high-speed until light and fluffy (about 3 minutes). Decrease the speed to medium and add the egg and mix until well incorporated. With the mixer on low, slowly add the flour mixture until smooth. Note, the dough will be very soft.

Scoop the dough into the pan and using your fingers, push down into the pan to form an even crust. Be sure to flour your fingers so the dough will not stick to them. Then place the pear halves, cut side down onto the dough and press gently. Lightly sprinkle the cinnamon and sugar over the top.

Bake for about 45 minutes, or until the crust is a light golden brown,. Let cool on a rack.

Mix the orange marmalade, lemon zest and lemon juice in a small bowl. Place in the microwave and heat on high for about 30-60 seconds. Stir until combined then brush over the top of the tart. Remove tart from pan, cut and serve with the remaining marmalade mixture.

Pour your favorite warm drink, cut a slice of this Pear Tart and sit back and enjoy the beauty of the season and be thankful for the simple pleasures in life!

This site uses Akismet to reduce spam. Learn how your comment data is processed.